With Chapter Three nearly upon us, I’ve decided to compile everything coming to you with this update into a single “changelog” post. Yes, I’m still doing the final renders and it has to go through beta testing until most of the bugs are squished, but at this point I can confidently say what’s actually in the damned thing.

Some of these items were mentioned in previous Weekly Update posts, but for the sake for consolidation I’m putting it all down right here. With the development of this chapter being so, ah… fraught with issues, I figure some of these upcoming features will have been forgotten, anyway.

And of course, the typical dev caveat: Everything here is still subject to change at a moment’s notice for any number of reasons.

Chapter Three of the Mythos Story!

This is the biggest, most important part of the update, obviously. Just like the first two chapters, Chapter Three will cover roughly two days in the life of Kylie/Kyle Nelson as they investigate the murder of Lisa Harrison.

Somehow, after rearranging and renumbering and merging and splitting things together, I have once again ended up with 13 scenes. Peculiar how that number keeps ending up as the scene count, isn’t it?

Two of these scenes are “missable,” technically, in that they are the sex scenes! Each of the sex scenes has two “phases” per gender, for a total of four different… sex… things.

As noted before, but stated here (with finality): These scenes will not have animations. There will be more rendered stills than in the Chapter One and Chapter Two sex scenes, and the writing style will be the same, but there won’t be any animated humping.

The menu graphics have been tightened up so that the boxes look more distinctive and so that there’s not such an ungodly amount of space in between the choices.

As before, the menu options are numbered so that you can type the number of your choice instead of needing to move the mouse to click your option. 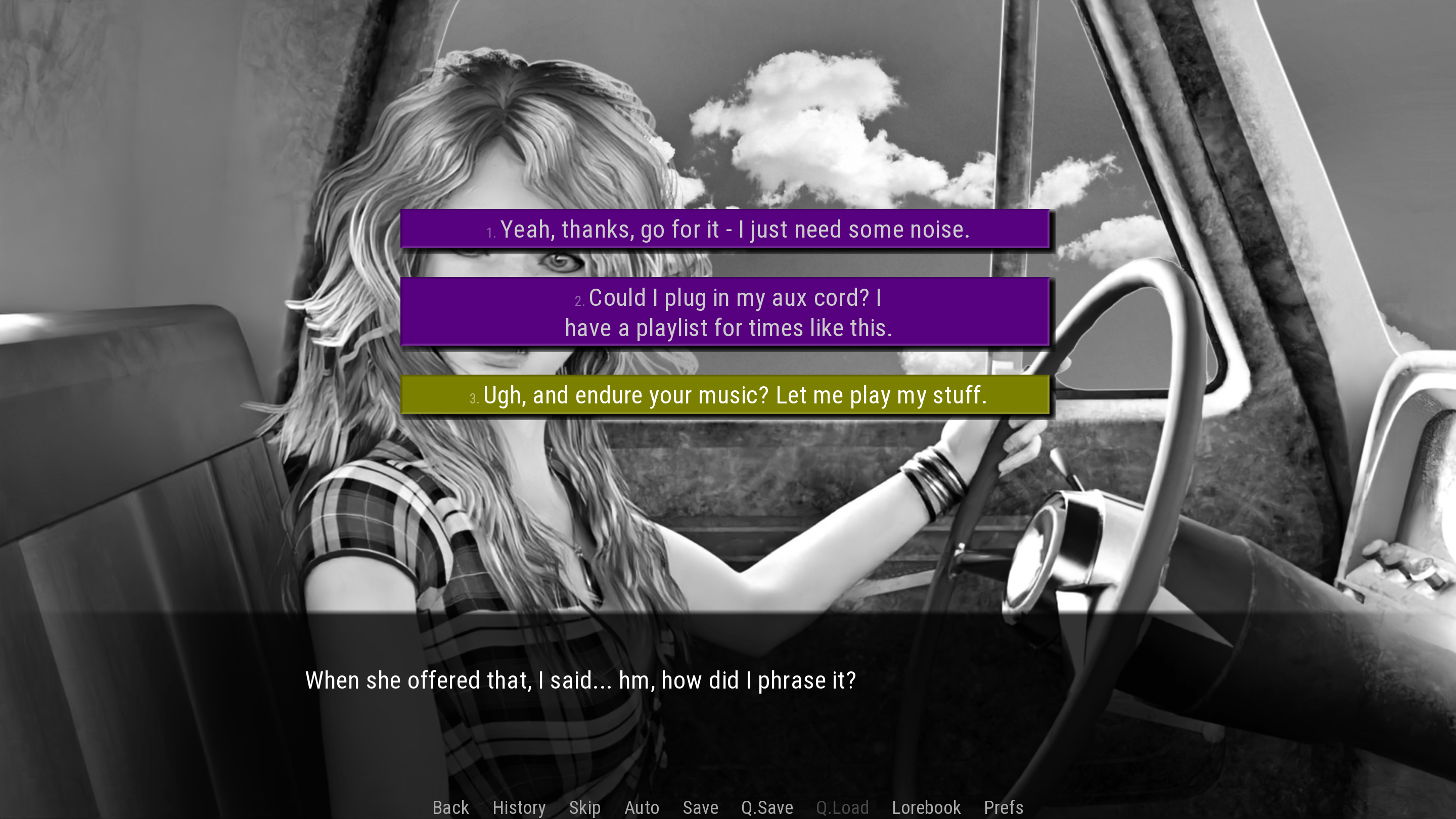 When you start a new game, you’re now greeted by a lovely new cinematic that introduces all the characters.

I’m still working on this bit, but there will be new music included with Chapter Three. Some of the music I made specifically for this chapter aren’t being included, while I discovered that some scenes needed new music that I still have to compose and stick in. Thus, I don’t have a final list of how many tracks are going to be in the update, but… there will be… some?

Do you like to see the entire render of each scene, but the H key on your keyboard is broken? Perhaps you can’t figure out how to hide the text box on Android (I sure as hell have no idea how to do it)? Worry not, for in the options menu you can now make that text box and clear or opaque as you like.

As such, the dialogue font is slightly different, with a black outline so that it will stand out regardless of your opacity setting. 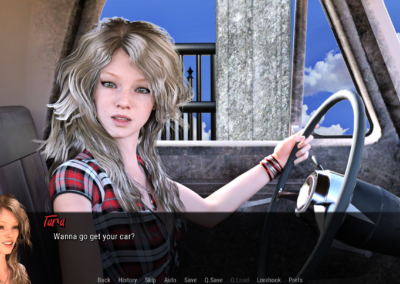 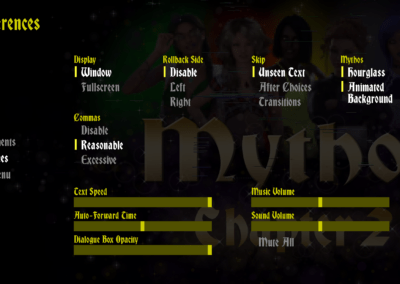 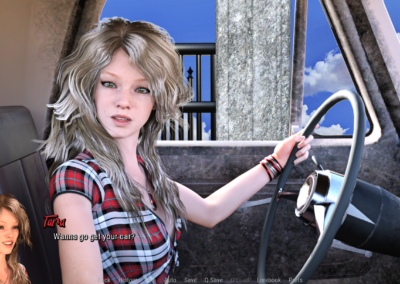 New Side Images and Nameplates!

All of the side images (the character portraits that appear next to the dialogue to indicate who’s speaking) have been revamped to show expressions that match the character’s mood, as well as to include a “halo” so that it stands out against the background images.

Additionally, the characters’ names are shown in varying fonts, to even further differentiate who’s saying what. Between the side images, fonts, and colours, it should be far more obvious when Tara is speaking versus Sophia. 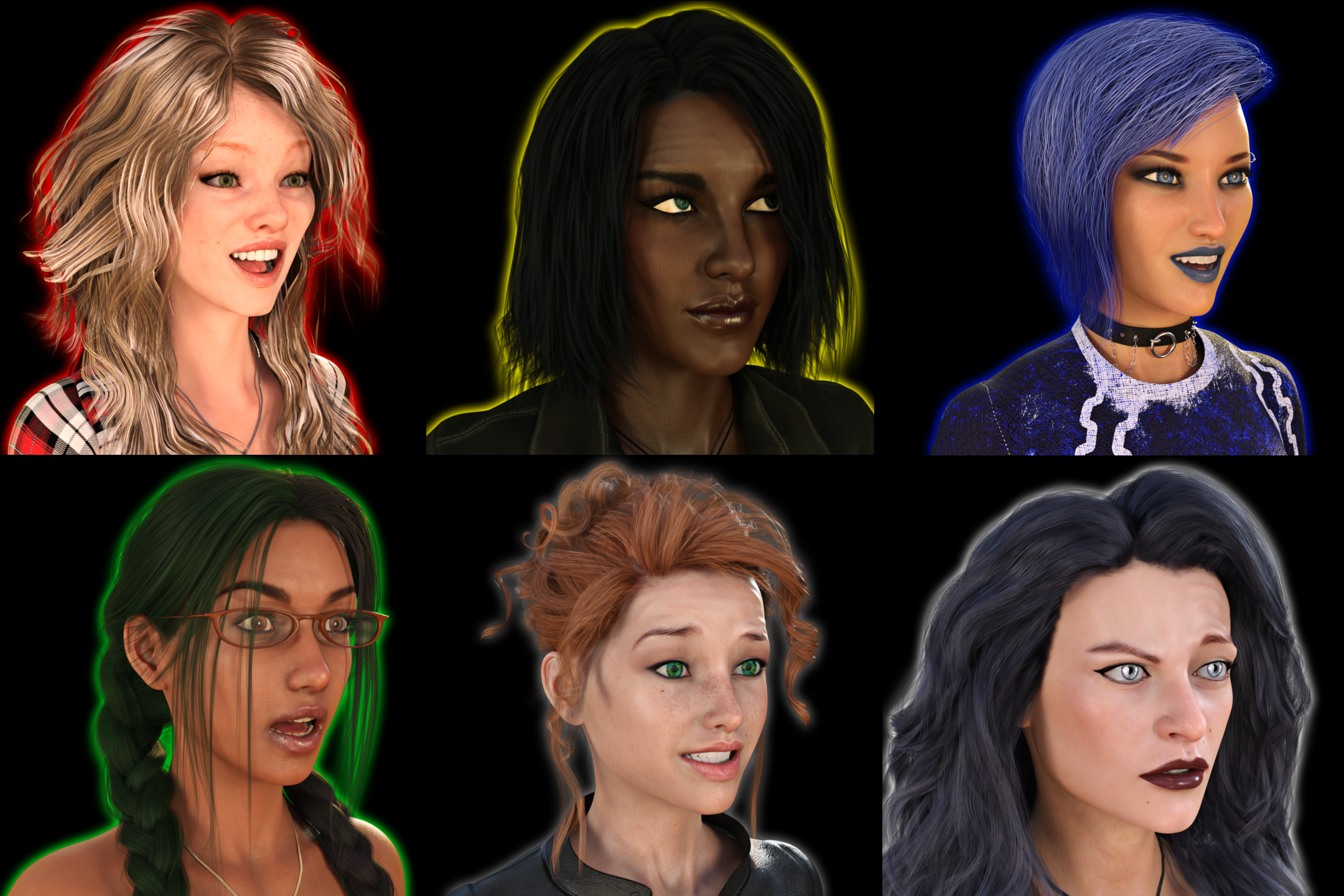 Tales from Mythos (in the game)!

Do you love reading short stories, but hate using a web browser? Maybe your internet is unreliable and you really need to reference back to something you read because a character just made a possible reference.

Fear not, for all of the “Tales from Mythos” short stories are being packaged with the game client, accessible through the in-game menu. To avoid spoilers, certain stories are locked behind in-game events (though all are still visible on the website).

Additionally, there may be one or two additional stories only available in the game… 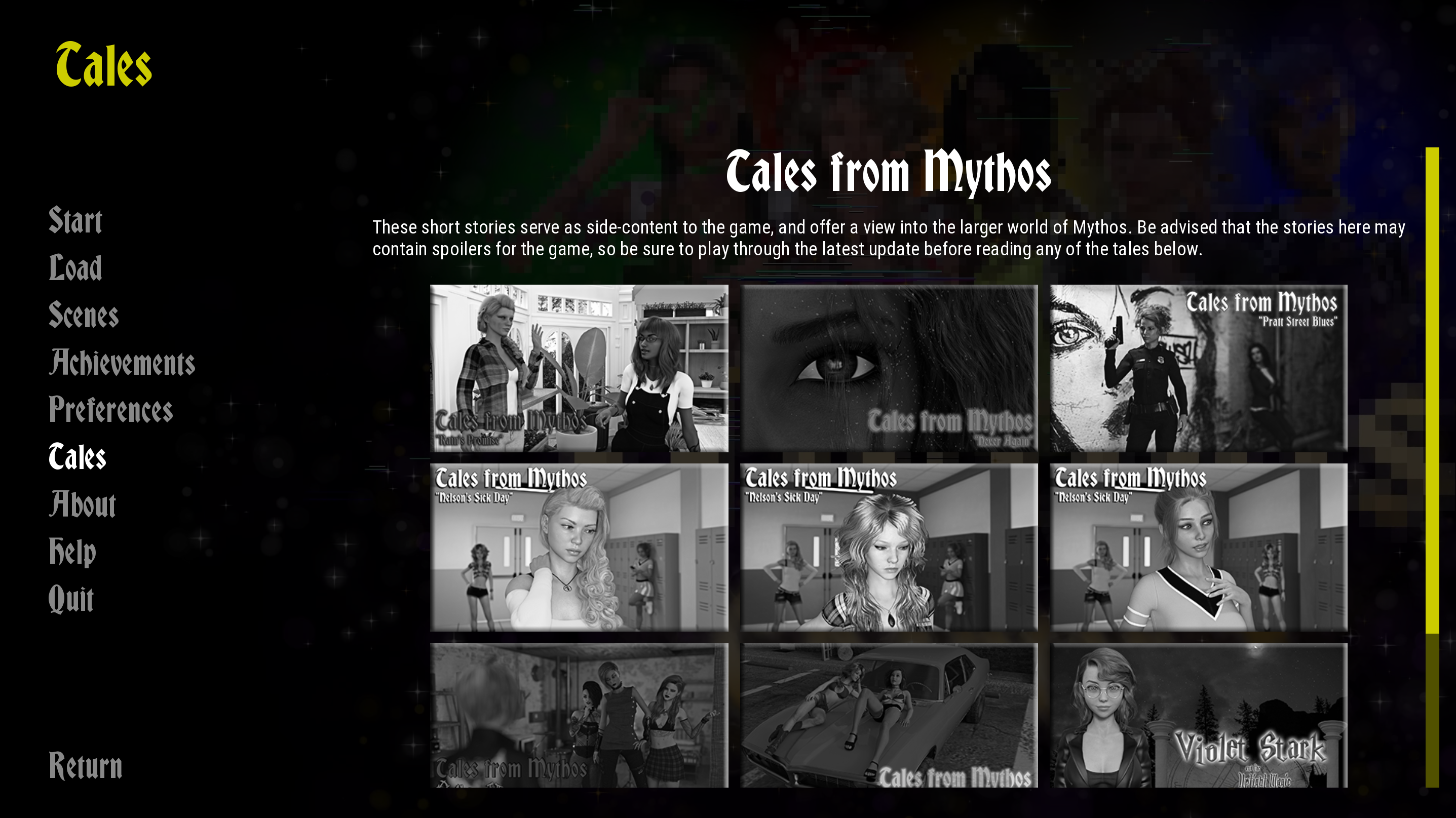 With somewhat of a grasp of what’s going on in the world, it’s time for you to actually start doing some sleuthing! When a character says something that may stand out to you, try clicking on those words. If your hunch is correct, you can trigger a bit of additional dialogue that can give you another clue (or red herring) in your investigation.

These special words and phrases will look just like any other text, so pay attention to what people are saying or you could miss something vital!

You have enough on your mind, what with trying to find a killer (or killers); does your love life need to be complicated as well? Not anymore!

In the preference menu (and at the start of a new game) you’re given the option to enable “Relationship Hints”. These hints will outright tell you what options to pick if you want to get into a girl’s panties, or what options to pick if you want those panties to stay firmly in place. No more trying to figure out just what the hell B is into (and you probably don’t wanna know).

Of course, you can also disable this and go in blind, though I can’t be held responsible for you wrecking your love life with a flippant response…

Important note: There is not (and will never be) a walkthrough for the investigation part of the game! It’d be impossible to do so, because (as I’ve said a billion times) there are no “best choices” here. The only choice that matters is the last one, where you formally accuse someone of being a murderer. Everything you do up until that point is gathering evidence. This also means that you can solve the murder successfully without ever managing to click the proper “Investigation Mode” dialogue lines mentioned above – and that’s okay! Play how you want. 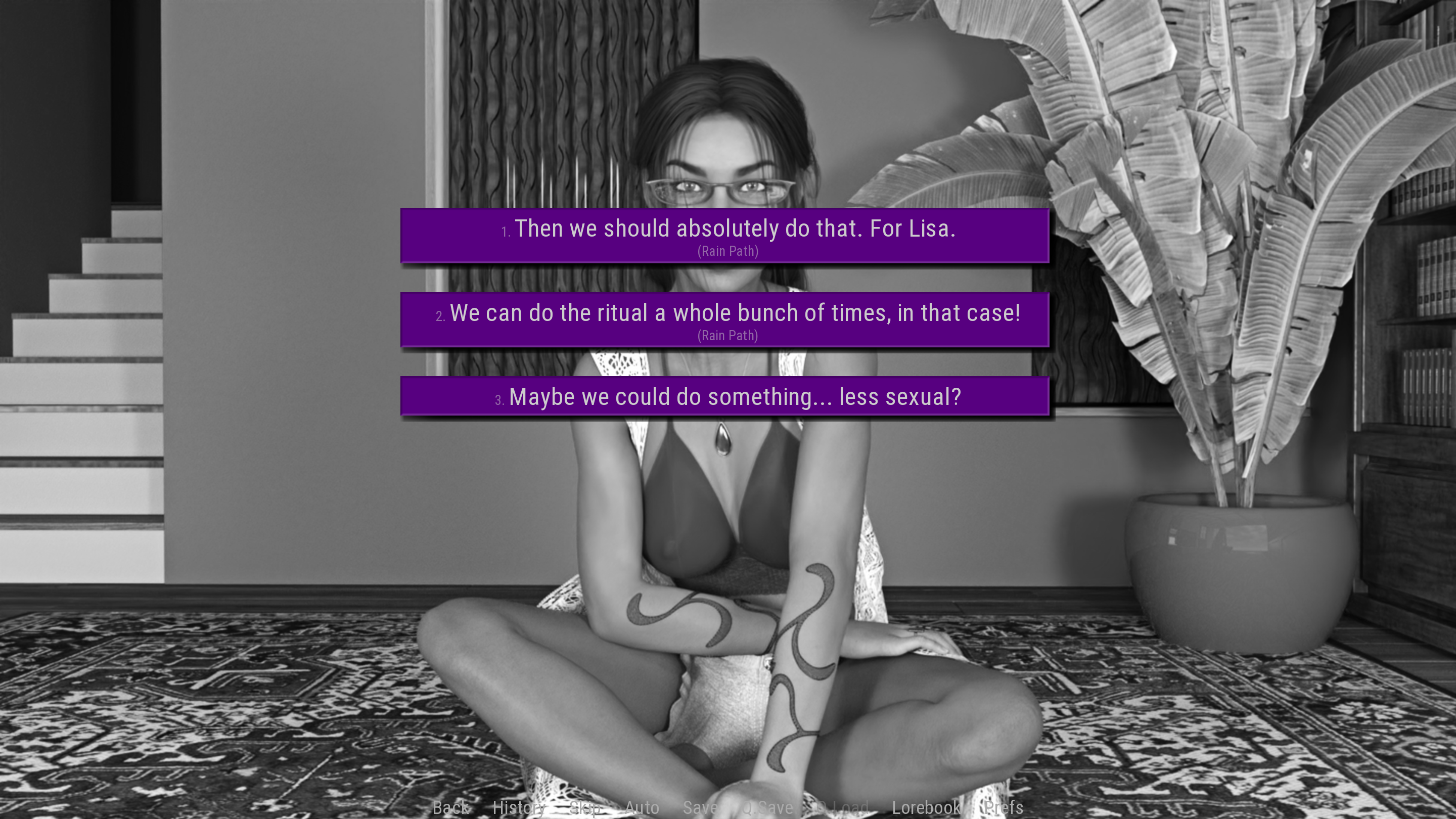